Hornets are known for their enormous nests and painful stings. They are aggressive, territorial, and best left alone. Learn how to identify hornets, their nests and avoid unpleasant interactions.

Hornets can look quite different from each other, but they have one trait in common: their ability to repeatedly sting. Use the following descriptions and images to help you avoid these grumpy, stinging insects. The Yellow Hornet (Dolichovespula arenaria) is known by a few different names, including the Aerial Yellow Jacket and the Sand Hill Hornet. You can find this half-inch long insect across the United States, except the Great Plains states. Like most stinging insects, they have yellow and black banded stripes. Also, you can recognize yellow hornets by their hanging, umbrella-like nests. They prefer shady spots like trees, shrubs, and under eaves. Dolichovespula maculata, Bald-Faced Hornet, and White-Faced Hornet are three different names for the same stinging insect. It resides in the northern half of the United States and grows between 5/8 and 3/4 inches in length. Their body is black, with white markings on the face, thorax, abdomen, and first antennal segment. Also, their nests are very large, about 12 inches tall.

Do not approach a hornet nest if you can help it! These large aerial or paper nests are home to hundreds of insects who do not appreciate having their space invaded.

Aerial nests are constructed of a paper-like material made from wood fiber and saliva. They have an inner cone made of hexagon-shaped tubes that hornets cover with a paper-maché-like exterior. The outside of the nest is oval-shaped and patterned with stripes. In certain parts of the United States, they may grow into what’s referred to as a “super nest.” Housing 4,000 or more insects, these super nests extend onto nearby overhanging items like tree branches or house eaves. Some of the largest were discovered inside objects like abandoned cars.

Where are they found? Hornets typically build aerial nests in exposed locations like trees, utility poles, overhangs, or structures.

As their name reveals, paper nests are made from a paper-like material. These wasps make nests composed of wood and plant sources mixed with saliva. All paper nests have an umbrella-like shape. Sometimes, you can even see the honeycomb appearance.

The Bald-Faced Hornet creates paper nests in open locations like trees, overhangs, utility poles, or structures. They also build on small items like twigs or branches. Bigger nests are attached to objects like porch ceilings or railings. 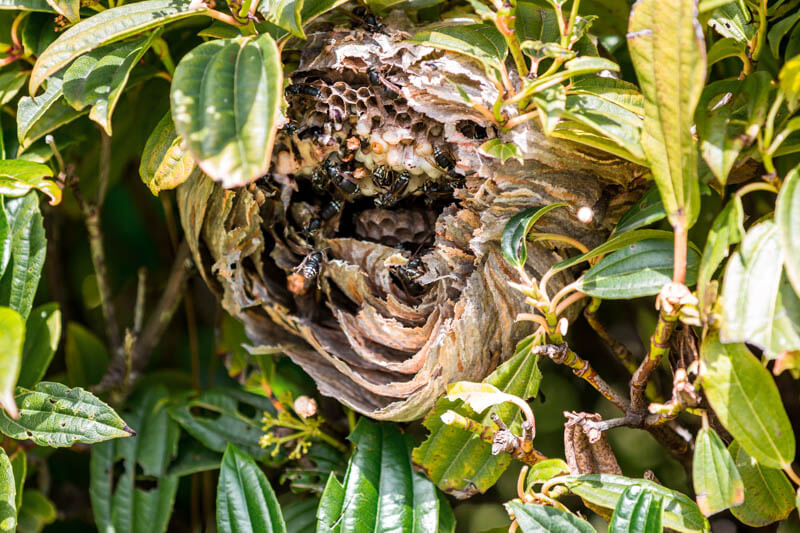 Because of the territorial bents of hornets, it is best to steer clear of them. Plus, when they sting, they often sting repeatedly. Multiple stings can lead to a severe injury, an allergic reaction, or even death. So, when you can, follow best practices to avoid being stung.

Always pay close attention to your surroundings when you’re outdoors. Keep an eye on trees, shrubs, and any kind of overhand at least 3 to 4 feet from the ground. If you find a nest on your property, call a specialist to assist you in its removal.

Lastly, make sure you know what to do if you are stung by a yellow hornet. Bee and wasp sting allergies can be incredibly severe, resulting in anaphylaxis and cardiac arrest within minutes.4 Care for your injury and also pay close attention to your symptoms. Immediately call 911 and, if possible, administer epinephrine if an emergency arises. 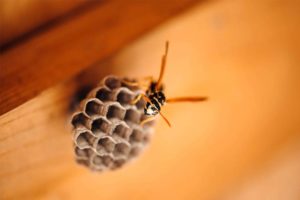 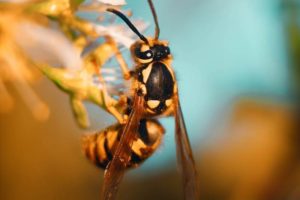